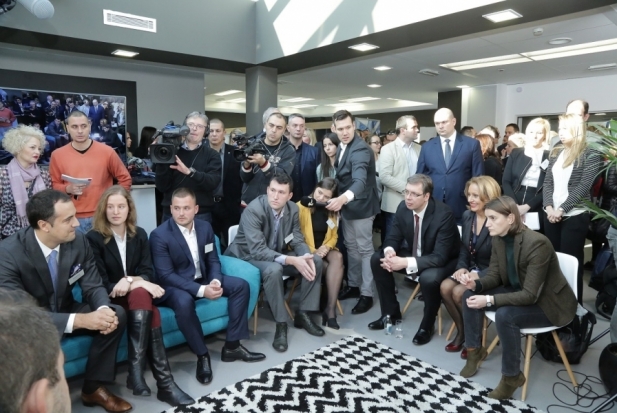 In the Science Technology Park Belgrade, Serbian government marked 100 days today. After the press conference Prime Minister Aleksandar Vucic talked to companies representatives that are developing innovations in the STP, noting that the state will invest at least $ 10 million in start-ups, business incubators and Science Technology Parks.

Our company “NovelIC Microsystems,” “Strawberry Energy”, “Lean Pay”, “Freelancers”, “Crater Group”, “Dotas”, “Ant Energy Consulting”, “Aggios Europe”, “Festo”, “MDPI ” Tehna automation ” and “INFOhome” highlighted the potential that we have in the field of innovation, developing new products and services and what should be changed in terms of operations and which barriers need to be removed in order to accelerate the development of high tech sector. The Minister Ana Brnabić pointed out several important areas in which the government will act in the future, of which is to support education in the IT sector in the first place.

Director of the STP Belgrade, Gordana Danilovic Grković, said that it is extremely important that we had the opportunity to show to the Prime Minister and Cabinet members, as well as the media and the general public in Serbia, the potential that we have in development, not only for the further development of STP Belgrade, but because we firmly believe that this is the future and that as a country we can develop much faster if we network Serbia this way.