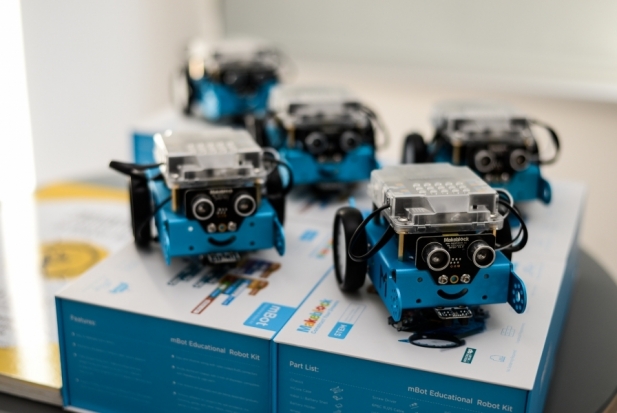 On the occasion of the great success of the campaign Battle for knowledge and providing Mbot robot for all 344 schools that applied for participation in the educational program, today at the Science Technology Park was held the official handover of the donation by the Ministry of Public Administration and Local Self-Government, which provided funds even for the purchase of 1,065 robots for 213 schools.

The action was launched by Fond B92 in early January this year with the idea that with the support of donors for each primary school in Serbia ensure the modern teaching tools with which to pupils from 5th to 8th grade to learn the basics of programming and coding.

Minister of State Administration and Local Government- Ana Brnabić thanked the B92 Fund for this initiative and expressed satisfaction with the ministry, with the support of UNDP, managed to secure a donation for those schools that have applied”.

“We listen and we are open to suggestions of organizations and businesses. This is one of those examples when we all mobilize to do something for all of us. I hope that in the future will be a lot more of these events speak for themselves. Thanks to the initiative of teachers who have proved to be real professionals. This is the right way to change Serbia and go to digital transformation,” said Minister Ana Brnabić.

Ministry of Education, Science and Technological Development also supported the Battle of knowledge, because the concept of this program fits into a plan that includes that from September informatics to become a compulsory subject in schools.

“The entire campaign has shown that the battle for knowledge and desire for knowledge there and we would like to thank all the good people and companies have also donated,” said obraćajajući the present Minister Mladen Sarcevic.

B92 Fund since the beginning of the campaign with the support of several dozens of socially responsible companies and individuals, provided by 5 Mbot robot for 131 school, after which they were supported by the Ministry of State Administration and Local Government provided funding for the remaining schools.

B92 Fund Board of Directors President Veran Matić said on this occasion: “The results of all this will be visible very soon, all these schools and their teams will soon start to compete. In June we organize the grand finale, we will know how robots are used, and what does this education. ”

Teachers and media representatives were welcomed by the Deputy Resident Representative UNDP Serbia Steliana Nedera, director of the Science Technology Park Gordana Danilovic-Grković and director of the Center for the Promotion of Science Nemanja Đorđević whose organization also supported the Battle for knowledge. Teacher training at this stage of the campaign enabled by the Ministry of Trade, Tourism and Telecommunications.

At the Science Technology Park, Minister Brnabić shared the robot teachers from 40 schools in Belgrade, which is now organized and professional development of teachers to use these tools in the classroom. Training for teachers from schools in other cities in Serbia is widely implemented and will be completed next week.

All schools that have not applied for participation in the Battle of knowledge will be able to do so during the competition which will be open before the start of the next school year.