The Swiss Confederation is donating CHF 3,75 million for the further development of innovations and the network of science technology parks in Serbia - Naučno-tehnološki park Beograd
Skip to content 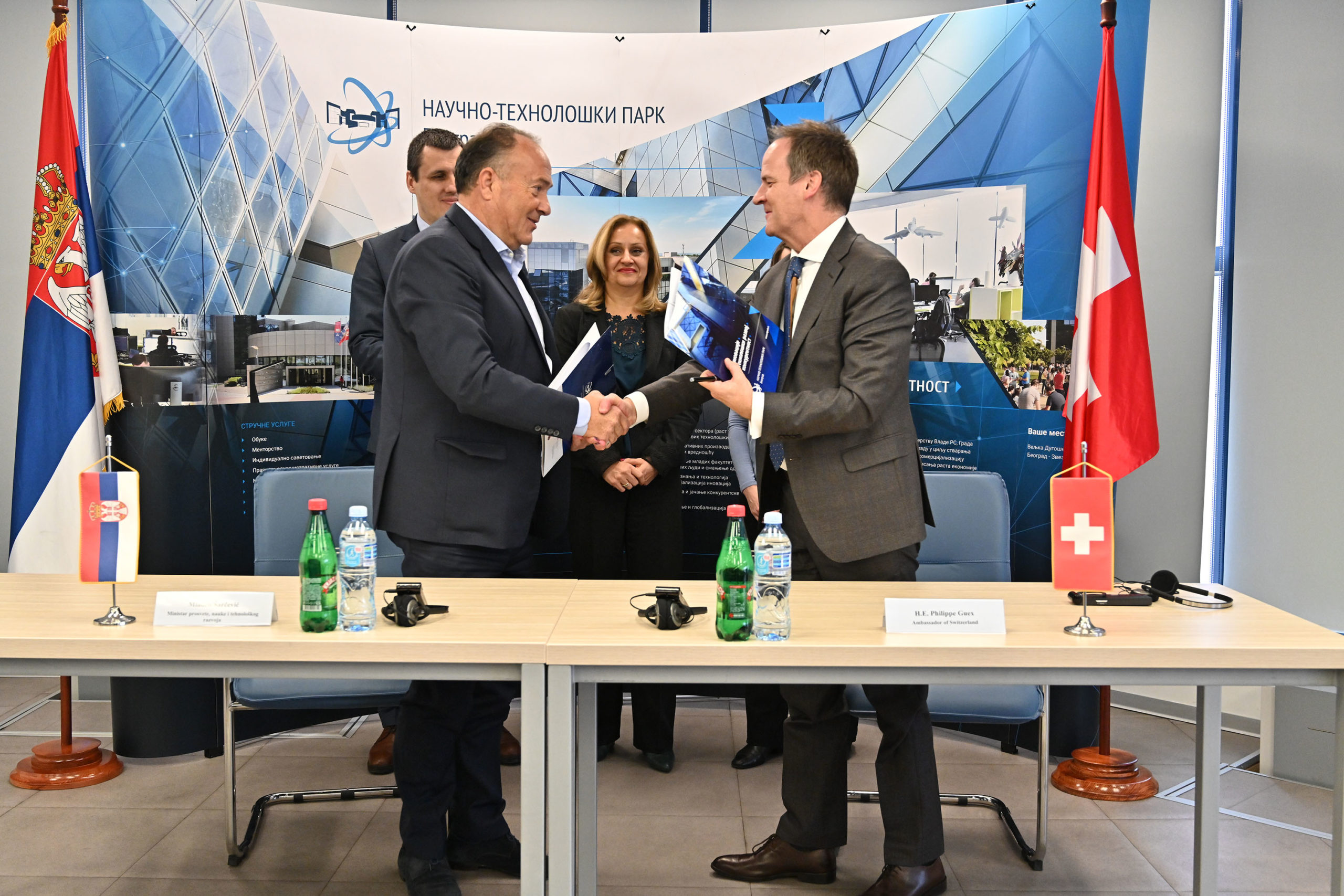 The Swiss Confederation will donate 3.75 million CHF over the next four years to support further development of innovations and the expansion of the network of science and technology parks in Serbia through the project “Technopark Serbia 2 – boosting exports through technoparks “.

The Memorandum of Understanding for the implementation of this project was signed today at the Science Technology Park Belgrade by the Minister of Education Science and Technological Development, Mr. Mladen Sarcevic on the behalf of the Government of the Republic of Serbia and the Ambassador of the Swiss Confederation in Serbia, H.E. Philippe Guex on behalf of the Government of Swiss Confederation.

The project envisages transfer of model, knowledge and experience of Science Technology Park Belgrade (STP Belgrade) in Nis and Cacak with the aim to help the development of science technology parks in these cities and to support the development of innovations in their regions. This project is building upon the previous project financed by Swiss Confederation, which focused on the establishment and development of the first functional science technology park in Serbia – STP Belgrade, in which more than 70 start-up and growing tech companies are developing their products and services today.

H.E. Ambassador of the Swiss Confederation in Serbia, Philippe Guex, pointed out the cooperation between science technology parks in Belgrade, Nis and Cacak under new project will contribute to the regional development of Serbia in the field of innovation, it will encourage young people for tech entrepreneurship and increase the competitiveness of the high-tech industry in Serbia.

– To further stimulate the growth of startups, a special pre-seed financing scheme will be established for start-up companies in the earliest stages of development, and through various trainings and mentor support, the project will provide the necessary knowledge and skills to accelerate the development of their innovations and the global market expansion. The Swiss Federal Institute for Intellectual Property will also contribute to the project, as it will provide the necessary knowledge transfer and provide additional support in the field of intellectual property rights, which is an area that startups often underestimate.

Minister of Education, Science and Technological Development, Mladen Sarcevic reminded that the Government of the Republic of Serbia is dedicated to creating  conditions for the development of science and knowledge based economy.

– We are building science technology parks in Novi Sad and Nis, with additional facilities for STP Cacak and STP Belgrade. We expect the technology parks in these cities to be as successful as the one in Zvezdara, which is why this support from the Swiss Confederation is so important to us – to achieve this effect as soon as possible. Representatives of the cities of Nis and Cacak are here with us  today and I would like to highlight it is our duty to create conditions for young people to realize their ideas, to develop startup companies, create and find jobs and secure their future in their country.

Gordana Danilovic Grkovic, Acting Director of STP Belgrade pointed out that the biggest challenge in 2015, when STP Belgrade was founded, was how to develop a successful technology park as quickly as possible in accordance with the experience of developed countries and to create a model tailored to our conditions.

– This is exactly what the Government of Swiss Confederation helped us to do.  Now, with the support of this project, we will develop technology parks that will be able to generate growth through the development of innovative products and services which have global market potential. In addition, we will be able to include more young people in our programs while 100 best startups will receive pre-seed funding. What we should all be aware of, is that the transfer of STP Belgrade model to other technology parks does not mean mere copying, it is much more than that. This is where the support of Swiss Confederation will have key relevance – to ensure continuous learning for our colleagues in Nis and Cacak in order to recognize the specifics of innovation development in their regions and develop technology parks tailored to their own environments.

By establishing technology parks we create instruments that can generate growth. For example, companies – members of STP Belgrade had an income of 20 million EUR, while the value of export was 10.5 million EUR in 2018. Within the project “Science Technology park Belgrade – a new export instrument of Serbia”, which was previously supported by the Government of Swiss Confederation, 400 potential entrepreneurs were trained at STP Belgrade, 2,000 students were animated for tech entrepreneurship, 3D Innovation Laboratory was established and  business model for establishing and developing science and technology parks and incubators in other regions was created.

Enhancing the pre-seed support for startups and replicating an adapted model in the regions is expected to increase the number of innovation-driven startups and technology-based businesses supported by the STPs around Belgrade and in Nis and Cacak.