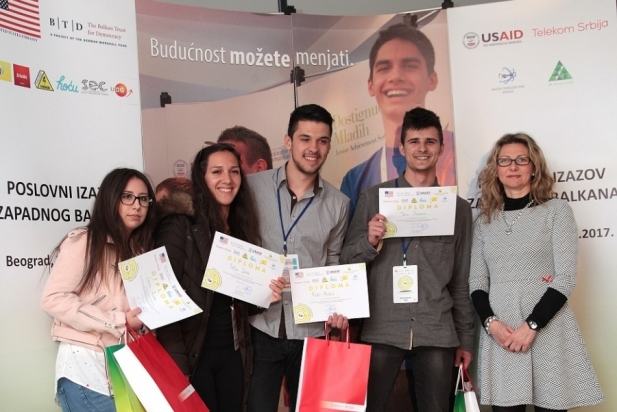 “The business challenges of the Western Balkans” – a competition of high school students from Bosnia and Herzegovina, Montenegro, Croatian and Serbian ELECTRIC BIKES IN THE WESTERN BALKANS – WINNING IDEA OF BUSINESS CHALLENGE

The idea of producing a bike from recycled materials and electric propulsion, won first place in the competition of high school students entrepreneurial skills “Business Challenge Western Balkans”, held in Belgrade. The winning team: Laura from Zagreb, Tarik from Tuzla, Sofia in Podgorica and Kadir from Sjenica, who competed with 80 peers from 57 secondary schools in Croatian, Montenegro, Serbia and Bosnia and Herzegovina. The competition was organized by Junior Achievement Serbia with the financial support of the US Embassy in Belgrade, the Balkan Trust for Democracy, Telekom Serbia and the United States Agency for International Development.

On the first day of the competition, the students divided into 20 mixed teams were given the task to create a service or product to promote cycling and to increase the number of cyclists. Four students form a team coming from the four countries and were not known before the competition, which made the challenge even greater. On the second day, they develop their business ideas. On Monday at Science Technology Park Belgrade teams presented their business plans before the jury followed by winner announcement.

This competition was organized for the fifth year in a row, and after Belgrade (2013), Sarajevo (2014), Podgorica (2015) and Zagreb (2016), the host city was again in Belgrade. The aim is to develop communication and presentation skills, students gain self-confidence and developing the idea of “zero” business plan until they become aware of their options and so enhance their entrepreneurial spirit. Also, the competition highlights the importance of connecting young people living in the Western Balkans and be aware of the necessity of joint activities at the regional level. All participants of the Business Challenges of the Western Balkans have won regional and national competitions held in four countries in this school year, in a competition of more than 1200 students.

“Junior Achievement” is one of the national organizations within the global network of entrepreneurial education program Junior Achievement Worldwide, formed in 1919 in the USA and now made up of 121 member states from all continents. The organization’s mission is to prepare and inspire students of primary and secondary school students for life and work in the modern world through the implementation of educational programs in entrepreneurship, business and financial literacy.